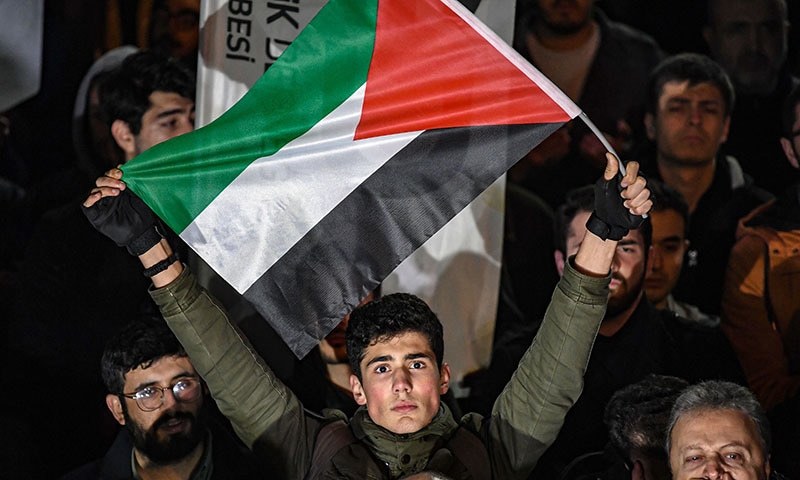 The plan for the Middle East of the president of the United States, Donald Trump, provoked on Tuesday a lukewarm response from Europe and the UN, and a furious reprimand from key Muslim countries who denounced it as a betrayal of the Palestinians.

These are some of everyone’s reactions to the plan, which had already been flatly rejected by Palestinian leaders before Trump launched it along with Israeli Prime Minister Benjamin Netanyahu.

Palestinian President Mahmoud Abbas, who participated in previous US-led peace talks with Israel but stayed away from Trump’s proposal, promised that “this conspiracy agreement will not be approved.”

He promised to “resist the agreement in all its forms” after meeting several Palestinian factions in the West Bank city of Ramallah.

“Our people will take you to the history dump.”

The top EU diplomat, Josep Borrell, said the bloc “will study and evaluate” Trump’s proposals based on his commitment to a “negotiated and viable two-state solution that takes into account the legitimate aspirations of the Palestinians and the Israelis. ”

Germany, the most powerful player in the EU, echoed Borrell’s point by calling for a balanced approach.

“Only a negotiated solution of two states, acceptable to both sides, can lead to a lasting peace between Israelis and Palestinians,” said German Foreign Minister Heiko Maas.

Britain, which will leave the EU on Friday and has had a special relationship with Washington, gave the warmest reaction.

“This is clearly a serious proposal, which reflects a lot of time and effort,” British Foreign Secretary Dominic Raab said in a statement.

Downing Street said the proposal “could be a positive development.”

The United Nations said they remain committed to a two-state solution based on the borders existing before the 1967 war, when Israel seized the West Bank and Gaza.

“The position of the United Nations on the two-state solution has been defined, over the years, by the relevant resolutions of the Security Council and the General Assembly for which the Secretariat is bound,” said Stephane Dujarric, spokesman of Secretary General Antonio Guterres.

Russia said it would study the plan and asked Israelis and Palestinians to negotiate directly to find a “mutually acceptable compromise.”

In presenting a note of doubt, the Vice Minister of Foreign Affairs, Mikhail Bogdanov, said: “We do not know if the US proposal is mutually acceptable or not. We must wait for the reaction of the parties.”

Turkey, a strong defender of the Palestinian cause, condemned the plan.

“This is an annexation plan aimed at killing a two-state solution and extorting Palestinian territory.”

Iran, which does not recognize Israel and has been in a confrontation with the Trump administration, denounced the plan as a threat to regional stability.

“The shameful peace plan imposed by the United States on the Palestinians is the betrayal of the century and is doomed to fail,” the Iranian Foreign Ministry said.

The Lebanese movement backed by Iran, Hezbollah, which Washington calls a terrorist group, said the plan represented an attempt to “end the rights of the Palestinian people,” adding that the “shameful movement” […] could not have been done without the complicity and betrayal of a number of Arab regimes. ”

The United Arab Emirates, which sent its ambassador to Trump’s announcement with Netanyahu despite not recognizing the Jewish state, praised the plan.

“The plan announced today offers an important starting point for a return to negotiations within an international framework led by the United States,” the UAE embassy in Washington said on Twitter.

Egypt called on “the two interested parties to undertake a thorough and thorough examination of the vision of the United States to achieve peace and open channels of dialogue.”

The Foreign Ministry added that the negotiations should aim at “a comprehensive and just peace and the establishment of an independent Palestinian state.”

The Jordanian Foreign Ministry said an independent Palestinian state based on the pre-1967 borders was “the only road to a comprehensive and lasting peace.”

Saudi Arabia said it “appreciates” President Donald Trump’s efforts to design a peace plan in the Middle East and called for the start of direct talks between Israel and the Palestinians.

Any disagreement with the plan must be resolved through negotiations under the auspices of the United States, he said, “to move forward in the peace process to reach an agreement that achieves [the] legitimate rights of the Palestinian people. ”

“The kingdom appreciates the Trump administration’s efforts to develop a comprehensive peace plan between the Palestinian and Israeli parties,” the Foreign Ministry said in a statement published in state media.

King Salman of Saudi Arabia telephoned Palestinian President Mahmoud Abbas and stressed “the firm stance of the kingdom on the Palestinian issue and the rights of the Palestinian people,” SPA The state news agency said.

“The king supports the Palestinian people and supports their options and what achieves their hopes and aspirations,” he said.

“The Palestinian president expressed his gratitude to [King Salman] for his enthusiasm and interest in the Palestinian cause, and for the kingdom of Saudi Arabia for its consistent and supportive positions towards Palestine and its people ” SPA said. source dawn