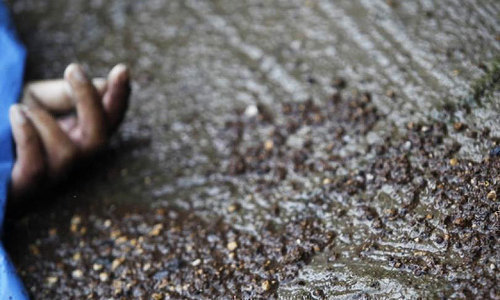 PESHAWAR / SWABI: The Khyber Pakhtunkhwa government has set up a three-member committee to investigate the dismissal and murder of two health workers during the polio campaign in Swabi district on Wednesday.

The committee has been told to submit its report within three days.

A notification, issued by the department of internal and tribal affairs on Thursday, said an investigation committee was formed on the directives of Prime Minister Mahmood Khan to carry out an investigation into the killing of vaccinators within the limits of the Parmoli union council in Swabi.

Meanwhile, the coordinator of the National Emergency Operations Center for Polio, Dr. Rana Muhammad Safdar, who visited the place where the incident occurred in Swabi, reviewed the situation with respect to the current unit. He said the campaign was postponed in few union councils selected after the incident.

"The place where the incident occurred is on the edge of the group of houses quite close to the basic health unit and the residence of one of the two LHW, killed in the attack," Dr. Safdar told Dawn.

"Together with the deputy commissioner, the district police officer and the polio program Khyber Pakhtunkhwa and the national security advisor, we will go deeper into the causes of the incident," he said. He said more was mounted to provide a safe environment for vaccinators and protect children against disabilities.

"Since 2012, a total of 47 people have died in polio-related incidents, but workers are not affected by such threats," he said.

Dr. Safdar said the documentation to grant the Shuhada Package to the two murdered workers was in progress.

Meanwhile, Swabi DPO, Imran Shahid, told Dawn that after IGP Sanaullah Abbasi's visit to the district and inspection of the place where health workers were killed, it was decided that each polio team would be protected by Security personnel during the current campaign.

On the other hand, health workers presented their demands and sought an adequate security and financial assistance mechanism for the families of the two vaccinated dead.

The murdered vaccinators were buried in their ancestral cemetery and the funeral was attended by officials from the district administration and health department, politicians and local people in large numbers.

Authorities said Deputy Commissioner Shahid Mahmood, health officials and district police officers participated in consultations to adopt a new course of action to achieve the desired objectives and continued the campaign. They pledged to continue the campaign and assured the activists all possible help, especially security.

A detailed presentation was made to the IGP about the safety of activists, the normal, sensitive and more sensitive regions of the district and the previous operations carried out against terrorists in Razaar Tehsil.

DPO Imran said there were 1,000 polio teams and that each team would be protected. "Among them, 130 teams leading the campaign in the most sensitive regions would now have two security staff members, while the remaining 870 would have a security person," he said.

Taking into account the sensitivity of the campaign, about 200 security personnel from the Hazara division were deployed to Swabi to perform tasks during the trip.

The DPO said that the operations against the militants had been carried out from 2013 to 2016 and the Parmuli region had been declared peaceful. That's why dead vaccinators didn't have security personnel, he added.

The LHW held a meeting at the Tehsil headquarters hospital, Kalu Khan. The district health officer, Mohammad Tariq, said at the meeting that he had demanded full security for activists. "Without a perfect security mechanism, you (LHW) would not perform the polio function," he added.

The LHW said they would mourn the death of their colleagues for three days. They also asked the government to provide work for one person from each family of victims and arrest the murderers. They said the campaign should take place once a month.

In Kohat, security measures were taken for the infallible safety of polio equipment.

In a statement, police said special control and monitoring rooms were established to provide security to field personnel. The statement said the police were being assisted by intelligence agencies and the army.

Meanwhile, the Kohat deputy commissioner, while chairing an evaluation meeting of the ongoing polio vaccination campaign, said there should be no obstacle in the path of vaccinating children and that all objectives should be achieved.