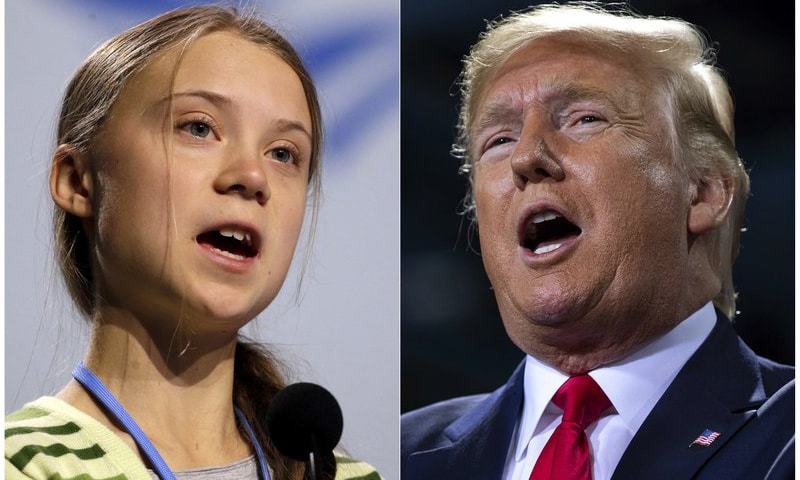 The head of the World Economic Forum says it is “reassuring” that US President Donald Trump and climate activist Greta Thunberg return to their annual meeting in Davos this year, and noted that environmental concerns will be a key issue

WEF founder Klaus Schwab sees great changes in business, society and culture during the 50 years since he created the annual meeting in the Swiss Alps, which was initially a forum for business leaders, but now it is also a stop key for policy makers and activists.

He said catastrophic trends such as global warming, climate change and the extinction of animal species would lead the agenda at the meeting that begins on Tuesday.

The forum is changing its focus over the past few years on how technology is transforming lives into the environment and responsible business practices that promote jobs, fight against climate change and work for social good along with earning profits.

The focus on the environment could become an awkward issue for Trump, whose administration has called for greater use of carbon that throws carbon, removed environmental protections and minimized concerns among scientists about man-made climate change. Trump has also moved to get the United States out of the historic Paris 2015 agreement to fight climate change.

Schwab says Trump is welcome for his role on the world stage, while Thunberg will focus on the environment. Both will speak on Tuesday, opening day.

“I think both voices are necessary,” Schwab said Sunday in an interview with The Associated Press. “The environment will play a particularly important role during this meeting.”

Schwab noted the 160 projects of the “lighthouse” of the forum on inclusion and equality; economic development; technological governance; regional development; corporate leadership and ecology, including a project to plant a billion trees.

“Then, if Greta comes this year, you will see that we have made substantial progress,” he said, referring to his forum debut last year.

Time magazine chose Thunberg as its “Person of the Year” for 2019.

Schwab said the forum has helped express concerns about the environment since the 1970s, but said public awareness about climate issues has exploded.

“We have now recognized the urgency, because we know that the window to act (on climate change) is closing,” he said, adding that he hoped to inject “this sense of urgency into the meeting.”

He said that many companies are increasingly seeing the benefits of “ESG” (environmental, social and government concerns) in their business models.

“Companies recognize that … doing good … is a precondition for long-term survival,” said Schwab.

On Friday, Schwab and the presidents of the Bank of America and the Dutch nutrition company Royal DSM sent a joint open letter to the corporate leaders that are available this year to establish “a goal to achieve zero net greenhouse gas emissions by 2050 or before “if your companies don’t have it, I’ve already done it.

The head of the forum said that almost all European Union leaders will be available this year, including German Chancellor Angela Merkel. He said the EU has the opportunity to expose its vision for the future and turn the corner after three years of bargaining over Britain’s exit from the block, which occurs at the end of this month.

He also dismissed critics who criticized the forum as vacations too exclusive for the world’s out-of-touch elites.

“If I am particularly proud of something over the past 50 years, the community of young leaders has been created many years ago,” Schwab said, citing 10,000 young “Global Shapers” in more than 400 cities that he says are involved in trouble. on the floor. “We try, and I think quite successfully, to integrate a lot of the young generation from the bottom up.”

The Davos meeting has fought against the reputation of being a refuge for the rich, powerful and famous during its five decades. Over the years, the forum has hosted celebrities such as Hollywood stars Shirley Maclaine and George Clooney, the Nobel Peace Prize winners Shimon Peres and Yasser Arafat, and former South African presidents F.W. of Klerk and Nelson Mandela, and business gurus like Davos, Bill Gates.

Meanwhile, hundreds of climate activists, young and old, embarked on a three-day march on Sunday to make their voices heard at the 50th World Economic Forum in the Swiss city of Davos.

Some disguised themselves as flowers or koala bears, a reference to the forest fires that currently ravage their habitat in Australia, and held banners that included: “Ignore the Donalds and listen to the Gretas,” referring to the president of the United States, Donald Trump, and “Make the world great again.”

The group, brandishing banners that warn “Climate crisis: a global economic failure” and “there is no Planet B”, urged political and business leaders to take responsibility for avoiding the environmental catastrophe when they left the small town of Landquart about 50 kilometers (32 miles) from Davos.

“The climate issue is issue number one and should simply be issue number one in Davos as well and participants should recognize it; it’s essential that they go in this direction, “said Katherine, a pensioner based in Zurich. AFP.

Local authorities have only authorized the first two days of the activists’ march to the elegant Klosters ski resort, but the group says they plan to follow narrow paths to get as close as possible to the summit.

“Here we are with 700 people walking to Davos. It is surprising, it is an incredible solidarity for people in a country that is very dignified, who is not dealing with the same kind of problems. But they understand the immorality of Davos, the immorality of a multimillion-dollar class that meets every year to celebrate its excesses, “said Kenyan environmental activist Njoki Njoroge Njehu.

Njehu delivered a speech at a similar meeting on Friday in Lausanne attended by Swedish teenage activist Greta Thunberg. She was not in Landquart, but is expected to appear in Davos and address the forum after the president of the United States, Donald Trump.

The atmosphere was festive when the group departed around 1:30 p.m. (1230 GMT), several serenaded their fellow demonstrators with alpine horns.

The WEF forum from January 21 to 24 emphasized that climate change is a key issue at this year’s summit. The forum is inviting some 2,800 invited participants, including major companies and about 50 heads of state and government, to set a goal of zero net carbon emissions by 2050.

“All companies that come to Davos have been asked to commit to zero net carbon emissions by 2050 or earlier,” organizers said.

Most Common Myths about Translation Ready to Break?

Automakers expect a bumpy ride ahead