Home Pakistan Cardiac procedure for Nawaz on the cards – Pakistan 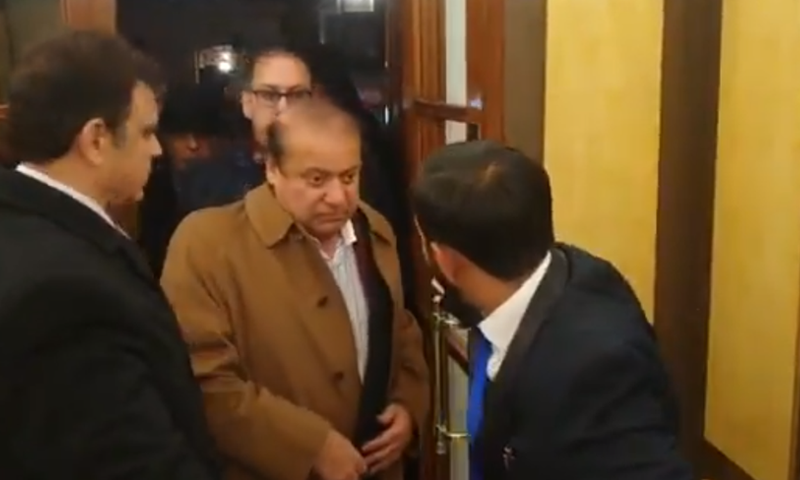 LONDON: Former Prime Minister and Supreme Leader of the Pakistan-Nawaz Muslim League (PML-N) Nawaz Sharif will be hospitalized in the next few days to undergo a test that will be followed by a cardiac procedure, his personal physician said Monday.

Speaking to journalists outside London Bridge Hospital, Dr. Adnan Khan said Sharif met with Professor Simon Redwood, who is a cardiac intervention authority. Professor Redwood is a consulting cardiologist at the hospital, which is associated with the Guys & # 39; and St Thomas NHS Foundation, and has performed percutaneous coronary interventions for more than 20 years.

"Professor Simon Redwood did a detailed examination of the history of Nawaz Sharif Sb's carotid artery disease. He has reviewed the details and feels that he (Mr. Sharif) needs to be hospitalized to undergo an angiogram," said Dr. Khan

He added that after the angiogram, the doctor is likely to suggest a procedure for the heart and the carotid artery. However, Dr. Khan said Mr. Sharif's immune disorder should be addressed before any procedure.

“It is important to discuss your thrombocytopenia with a hematologist before any surgery. The angiogram is probably planned for Thursday. After the PET scan, we will have a clearer picture of the hematological problem and the diagnoses. Only then can we plan the cardiac procedure. "

An angiogram is a medical imaging technique used by doctors to visualize arteries, veins and cardiac cavities. Although angiograms are generally considered safe, Mr. Sharif's low platelet count and a history of heart disease can raise the risk of complications. An angiography performed for an individual as an outpatient generally requires a stay of up to six hours in the hospital if there are no complications.

Mr. Sharif's visit to the London Bridge Hospital is one of a series of hospital visits made by him since he arrived in London on November 19. Mr. Sharif and his family members have consulted with several doctors, including those who specialize in heart problems and immune disorders. . He arrived in London three weeks after the Islamabad High Court granted him bail in the case of Al-Azizia for medical reasons.

Usually, during his visit to the hospital, he is accompanied by his son, Hussein Nawaz, his brother Shahbaz Sharif and Dr. Khan, Sharif's family doctor.

However, on Monday, Sharif was also joined by PML-N leader Nasir Butt, the central figure in the controversy surrounding the leaked videos of the district judge and sessions Arshad Malik.

Butt was seen leaving the family's Avenfield apartment with Sharif when he left home to go to the hospital. He was also seen outside the hospital premises after Sharif met his advisor.

Butt, who is said to have recorded the controversial statements of Judge Malik, was the center of attention on July 6 of this year when the PML-N leadership held a press conference and alleges that the judge had been "blackmailed" to to issue a verdict against Mr. Sharif The PML-N accuses Judge Malik of condemning Mr. Sharif under duress, however, the judge states that he was blackmailed by supporters of PML-N.

The Federal Investigation Agency raided Butt's house in July and claimed to have recovered "important documents." In September, Butt appeared in London to present what he said was "evidence" in the video scandal before the Pakistan High Commission.

Meanwhile, the Islamabad High Court (IHC) exempted Nawaz Sharif from personally appearing at the hearing of an appeal filed against his conviction in Al-Azizia's reference.

The court took two identical petitions filed by Mr. Sharif's lawyer and Mr. Butt seeking an investigation into the matter related to the judge's video scandal.

A bank in the IHC division made up of Judge Aamer Farooq and Judge Mohsin Akhtar Kayani postponed a new hearing for up to fifteen days.

The Office of the National Responsibility Office (NAB) informed the court that the office had submitted the response to the various requests of Sharif and Butt.

The court suggested that the petitioner's lawyer examine the NAB response and then present the arguments on the next date.

Upon hearing the request of another Mr. Butt seeking certification of the evidence against former Malik accountability judge, the court ordered the federal government to formally respond in writing to his request.

Mr. Butt's lawyer informed the court that his client asked the officials of the High Commission of Pakistan in the United Kingdom to certify the transcripts of the conversation between Judge Malik and Mr. Butt, the video recording and the report Forensic evidence.

Syed Mohammad Tayyab, deputy attorney general, argued that since Butt is a defendant and fugitive, therefore, he had no right to have the high commission verify the documents.

The court noted that Butt had not been declared a fugitive by the trial court.

However, the bank ordered high commission officials to respond in writing to the request and then the court would examine the matter according to the relevant laws.

Malik Asad in Islamabad also contributed to this report.